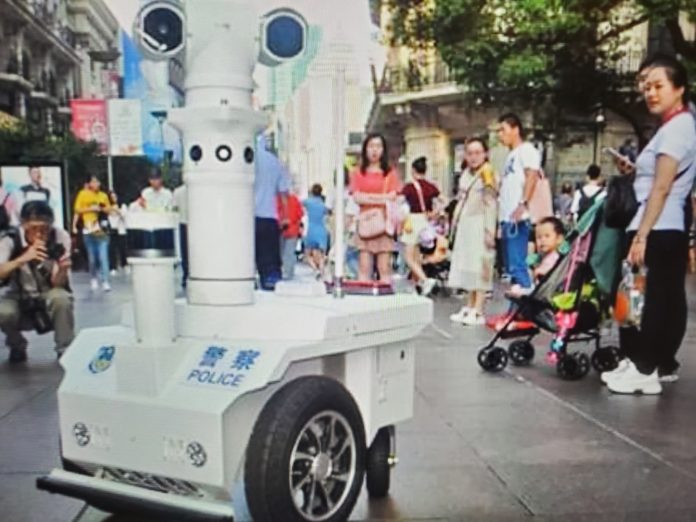 In our findings, we concluded China has obtained the bio-metrics of 6 billion people around the world. Robots are being built with scanning, targeting and terminating capabilities. With 5G, their abilities to quarantine, capture, or hurt people increase exponentially. China’s military is working on Micro-Bots, and Big robotics that can operate on AI Automation which would allow the Robot to scan and know who you are or even what you are thinking.

This particular Robot deployed in Shanghai yesterday, is not very advanced, it is actually a prototype the Chinese Government is testing for multiple reasons. One is if the Chinese can be Bio-Digitally Social Programmed. This is a term we coined to describe a very complex process of replication. Full details exist in our published work “AI, Trump, China, & The Weaponization of Robotics With 5G”, you may pre-view below via Amazon Embed link. The 2nd reason is to track and access for data from its citizens. The third, is to simply see its capabilities in action. The real Security Robots, China has yet to deploy. It could be deadly if they get to that stage with 5G.

China’s Socialist Regime tracks its citizens, and is administering a police state. Many people around the country are subject to arrest, torture or even organ trafficking if marked as enemy of the state. Robots can exponentially increase the power of the Communist State, and hurt the Chinese citizens further. With AI Automated drones, and micro-bots, the entire Chinese populous can be put into submission. The labor camps and concentration camps, would not be big enough to house all of the decedents the Robots could capture for the Chinese Regime. The U.S needs to expose China’s human rights violations that scale to genocide, before the Chinese deploy their 5G network with AI Automated Robotics. At the moment, they have not achieved that capability, but they are working on it.