AI, Trump, China and The Weaponization of Robotics with 5G Book...

AI The Plan To Invade Humanity

The Age of AI 5G and How it Programs You Against...

Worlds People in Danger by China and Big Tech: Including Bio-Disease,...

Extinction Codes: Over 100,000 Bodies Burned in Chinese Crematoriums from Coronavirus,...

Why We Sued Google, Facebook, Neuralink for Misuse of A.I, Endangering...

All Media, Corporations, Banks, & Politicians Can be Sued & Charged...

How All Corporations, Media and Politicians can be sued & Charged...

The Biggest Lawsuit of the 21st Century

Artificial Intelligence Predicts what Happens if Trump Gets Impeached & Removed...

Christians Tracked with AI and Facial Recognition for Organ Trafficking in...

How Chinese Corporations Threaten to Rape Iran with AI Tech &...

China Can Enslave Humanity with Artificial Intelligence, Robotics & Drones on...

Anti-Mask Law in Hong Kong is about Facial Recognition & A.I....

Chinese Hikvision Cameras 1 Mile from White House & Around the...

AI Sex Robots Destroy Human Culture in China & Around the...

Do Not Hold Smart Phone Against Your Ear

Are The Media Victims of AI Bio-Digital Social Programming?

Will FaceBook & It’s Employees be Charged under Article 3 of...

AI, TRUMP, CHINA & THE WEAPONIZATION OF ROBOTICS WITH 5G

AI, TRUMP, CHINA AND THE WEAPONIZATION OF ROBOTICS WITH 5G September 9, 2019 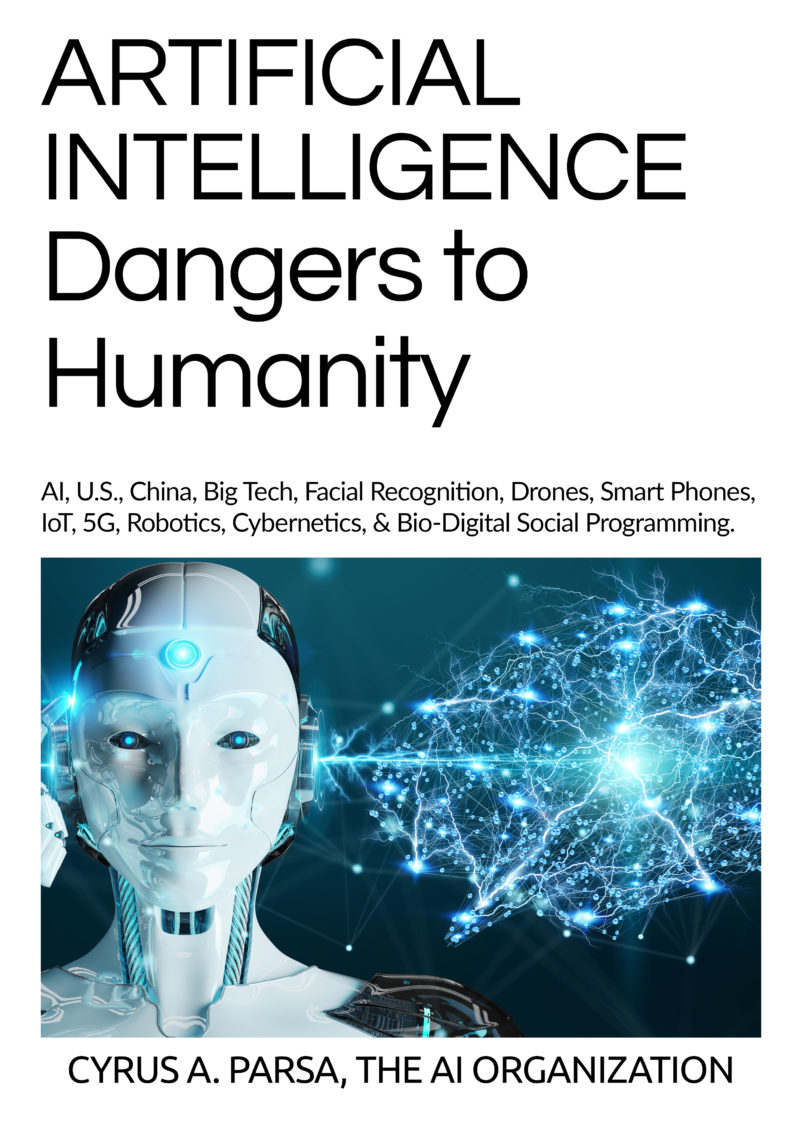 China and Big Tech threaten all the world's citizens with Quantum AI Digital Brain Technologies on the coming 5G and 6G networks that can form an Artificial Super Intelligence sourced from your personal Bio-Metrics. What are the inter-connections between AI, U.S, China, Big Tech and the worlds use of Facial Recognition, Bio-Metrics, Drones, Smart Phones, Smart Cities, IoT, VR, Mixed Reality, 5G, Robotics, Cybernetics, & Bio-Digital Social Programming? We will cover present, emerging and future threats of Artificial Intelligence with Big Tech, including technology that can be used for assassination or to control humanities ability to have free formed thoughts without AI Bio-Digital Social Programming. The book will cover Cyborgs, Super Intelligence and how it can form, and in what ways it can travel undetected through The AI Global Network as it connects with the internet and the Human Bio-Digital Network. Over 50 Companies and Organizations are discussed, such as Huawei, Facebook, Nearalink, Google, Baidu, Megvii Face++, and Alibaba. This book takes you in a simple way to understand what is Artificial Intelligence, and step by step, it takes the average reader through a process to understand very difficult concepts in a simplistic way. Every human being has the same brain, and same capacity to access abilities to think deep, and have insights that can better our world, in a safe way. The AI Organization hopes, the common person understands the coming age of AI, Robotics and 5G, and the dangers it poses as well as the positives. We also hope, scientists and big tech take one step back and think to innovate AI, in a more responsible fashion using an algorithm that takes every possible angle into consideration, to safeguard life. We will discuss what type of risk management and the components of this algorithm in the book, as well as the cultural aspects of AI. This AI book is meant to safeguard humanities interest, and we hope it receives acceptance from all people, may you be liberal, conservative, religious, atheist, the government, media or just a scientist doing what you cherish.

Cyrus, Your research, investigation, and analysis of AI threats to humanity and the interconnection between China and Big Tech is Genius, and deserves the support of the intelligence community, media and people from all walks of life. Artificial Intelligence Dangers to Humanity is very deep.

Cyrus, I don't think there is anyone in the world who researched 1,000 AI companies and concluded an Analysis that the interconnection between China and Western Tech Companies, with the combination of humanities Facial Recognition, Bio-Metrics, Drones, Robotics, 5G, Bio-Engineering, AGI, and a Digital Quantum AI Brain, threatens to social engineer, enslave, or possibly eradicate most of the world citizenry via China and Artificial Super Intelligence. Your Book is incredible and your many discoveries are amazing. August, 15th, 2019

Importation, Creation, and Formation of Bio-Digital AI and Risk Management via the Human Bio-Digital Network

Cyrus A. Parsa, is the Founder and CEO of The AI Organization, where he is also Director of Creative Analysis & Defensive Innovations. He has researched and investigated more than 1,000 AI, Robotics, 5G, Cybernetic and Big Tech companies. He warned of the Coronavirus, China and every major technological and geopolitical aspect transpiring in the Pandemic lockdown (MBT-AI Engineered Disease From China) with the publication of AI, Trump, China and the Weaponization of Robotics with 5G and Artificial Intelligence Dangers to Humanity. Cyrus’s mission is to help safeguard humanity first, and prevent disasters to the worlds people from China, Big Tech and the misuse of AI and bio-technology. As a last resort, Cyrus filed the biggest lawsuit in human history consisting of 87 pages on 12-16-2019, updated to disclose John Does on February 24th, 2020, Against China’s Communist Regime, Silicon Valley, major world leaders, media outlets and institutes, charging them for endangering the worlds people, complicity, weaponization of AI Bio-Tech, robotics, drones, facial recognition misuse, Complicity to Chinese genocide, negligent transfer to Bio-Tech to China, and bi-metric social media manipulation of peoples emotions, thoughts, and neural networks as they engage with smart phones, IoT, media and the world at large. Cyrus’s intention was not to single out just these few entities, rather to warn the worlds citizens were in danger, and to allow them to make an immediate change with China CCP by getting these entities to make a change for the worlds well-being. Everyone contributed in some way or another to the worlds issues, not just people on the left who were pointed out, liberals, conservatives, peoples of all walks of lives were complicit in some way or another. Cyrus wishes for the world to end its negative path, increase their virtues, improving the futures and well being of every person in the world through free will, respect and awakening.

He also runs Loyal Guardian Security, which specializes in China and Iran Intelligence and risk assessment created to assist in making our society safer and better. Cyrus earned his Bachelors Degree in International Security & Conflict Resolution and his Master’s Degree in Homeland Security. He is an expert in US, China & Iran affairs, and has consulted on Human-Organ Tracking, Anti-Terrorism, Vulnerability, Risk Assessments, Asset Management and Emerging Threats to governments, agencies, people and organizations.

He lived in the mountains of China with fighting monks as a youth and speaks Chinese, Persian, and English. With 20 years of hidden research and development in his consultation work, he assesses & provides guidance for clients from a multi-dimensional and multi-layered perspective. He maintains networks of thousands of Chinese and Western influencers and intelligence assets, allowing for great insight into the threats we face from China, Iran and the Western inter-connectivity of these countries.

These terms were needed in order to explain the dangers we face, and how they are rooted in these almost imperceptible elements that are now connecting with Artificial Intelligence, 5-G, Society, Smart Phones, the “Internet of Things,” “Smart Cities,” Cybernetics, Bio-Engineering and Robotics all through one AI platform. Within this platform, Cyrus found extinction codes, in stages, for humanity.