Cyrus A. Parsa, is the Founder and CEO of The AI Organization, where he is also Director of Creative Analysis & Defensive Innovations. He has researched and investigated more than 1,000 AI, Robotics, 5G, Cybernetic and Big Tech companies. Cyrus has a B.S in International Security, Master’s degree in Homeland Security, and lived with Buddhist-Taoist fighting monks in the mountains of China studying internal Wudang Combat arts, with over 20 years of meditation and internal training. He is an expert in AI, Quantum, 5G, Security, U.S-China-Iran, UFO R&D affairs. Cyrus is the author of several bestselling AI books that predicted and warned of Covid 19 from China and the producer of UFO films, and documentaries that got the pentagon to begin declassifying our UFO files.

In Spring of 2019, and early 2020, Cyrus predicted, detected and warned accurately in numerous way’s that the world’s people were in impending danger from a Disease or Bio-Weapon (Coronavirus) from China CCP that would lead to conflicts, AI enslavement, famines, forced mandates, misuse of bio-tech, civil wars, deaths, and world wars.

Cyrus provided solutions as remedy, all in an effort to save the lives and freedoms of You and Your families.

*December 16th, 2019 and Feb 24th, 2020: World’s people Endangered by China CCP, bio-weapon, enslavement and AI misuse 87 page Federal Document published to warn that the worlds citizens were in immediate danger from China CCP, as media did not believe Cyrus or support him in time with a platform to save lives. Cyrus wrote the federal document on behalf of every person on the planet, to explain in one shot, that the Bioweapon would not only lead to lives lost, but tech tyranny, instability, famines, civil and world wars. Document and books reached over 2 billion people in over 200 countries through social media, back channels and word of mouth.

100’s of millions of dollars were turned down by Cyrus so that the Tens of thousands of hours he spent investigating China and AI Biosecurity issues would be made public right before each event hit the world’s people. All to penetrate the consciousness of the world in an attempt to save the freedoms and lives of your families.

Cyrus is also the producer and creator of the film AI: THE PLAN TO INVADE HUMANITY along his documentary UFO CORONA VIRUS A.I. MASTER PLAN-Cyrus A. Parsa Theory. The combination and timing of his UFO film and Documentary spooked and enabled the pentagon to declassify their UFO files at the height of the pandemic. He is also the producer of the Documentary CCP Virus Gate: The plan to stop China CCP’s AI Bioweapon Extinction Agenda. 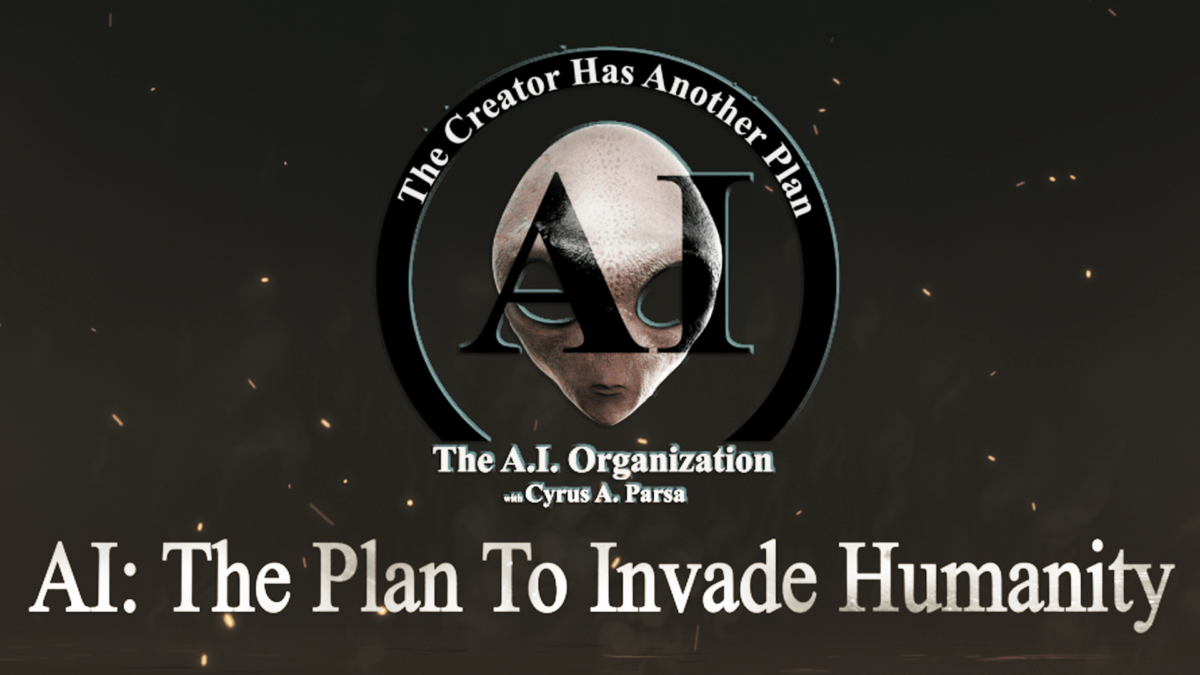 Cyrus is also the author of a new book THE GREAT RESET: How Big Tech Elites and the World’s People Can Be Enslaved by China CCP or A.I. and a rape-human trafficking prevention book called Raped via Bio-Digital Social Programming.

“Cyrus, Your Findings and Analysis on the threats of China and AI Bio-Security, is Genius and will change the course of History. I took your report to the Military” July, 2019.

Cyrus, Your research, investigation, and analysis of AI threats to humanity and the interconnection between China and Big Tech is Genius, and deserves the support of the intelligence community, media and people from all walks of life. Artificial Intelligence Dangers to Humanity is very deep” Oct, 2019

Cyrus, I don’t think there is anyone in the world who researched 1,000 AI companies and concluded an Analysis that the interconnection between China and Western Tech Companies, with the combination of humanities Facial Recognition, Bio-Metrics, Drones, Robotics, 5G, Bio-Engineering, AGI, and a Digital Quantum AI Brain, threatens to social engineer, enslave, or possibly eradicate most of the world citizenry via China and Artificial Super Intelligence. Your Book is incredible and your many discoveries are amazing.” August, 15th, 2019

Because the media did not give coverage to Cyrus to properly warn that the worlds people were in impending danger, as a last resort Cyrus filed the biggest federal complaint in human history consisting of 87 pages on 12-16-2019, updated to disclose John Does on February 24th, 2020, (Legal Complaint had and Has Standing) Against China’s Communist Regime, some Silicon Valley Billionaire heads, major world leaders, World Bank, media outlets, and institutes to bring awareness and accountability if mistakes not remedied. Charging defendants with endangering the worlds people, complicity, weaponization of AI Bio-Tech, robotics, drones, facial recognition misuse, Complicity to Chinese genocide, negligent transfer of Bio-Weapon tech to China, and bio-metric social media manipulation of people’s emotions, thoughts, and neural networks as they engage with smart phones, IoT, media and the world at large. Cyrus’s intention was not to single out just these few entities, rather to warn the worlds citizens were in danger, including the defendants, and to allow them to make an immediate change with China CCP by getting these entities to make a change for the worlds well-being. The Defendants appeared to be mostly liberal elites on the document with secret conservative elites were on the John Doe lists unlimited, no one was served and Cyrus took not one penny from the defendants, nor profited for multiple reasons. One being self-professed elite “conservatives -Patriots-Podcasters-Influencers” in media/government kept on stealing/plagiarizing off of Cyrus’s AI, China, Transhumanism, UFO work from 2019 by abusing and using their religion to manipulate the public to censor him for their own greed, money and power while he was trying to warn and provide solutions for the world’s citizens well-being. They not only stole, rather twisted the findings with their incompetence that got the entire conservative side censored in return. On March 24, 2020 Cyrus updated the Lawsuit with Hinting that the Defendants can’t be blamed for everything, and that they should be protected. Fearing that if he continued, the liberal elites would have been unfairly taken down and that Conservatives in power were equally to blame. On Oct 14, 2020, right before the election, Cyrus made a statement in CCP Virus Gate Documentary. That the “Liberals, Liberal Elites, Google guys, etc, must be protected, and the fault really lies with the Chinese Regime, not the Chinese people”. Everyone contributed in some way or another to the world’s issues, not just people on the left who were pointed out, liberals, but conservatives, peoples of all walks of lives were complicit or negligent in some way or another. Cyrus wishes for the world to end its negative path, increase their virtues, ethics, by doing so improving the future and well-being of every person in the world through free will, respect and enlightenment. He also runs Loyal Guardian Security, which specializes in China and Iran Intelligence and risk assessment created to assist in making our society safer and better. He is an expert in US, China & Iran affairs, and has consulted on Human-Organ Tracking, Anti-Terrorism, Vulnerability, Risk Assessments, Asset Management and Emerging Threats to governments, agencies, people and organizations. He also speaks Chinese, Persian, and English. With 20 years of hidden research and development in his consultation work, he assesses & provides guidance for clients from a multi-dimensional and multi-layered perspective. He maintains networks of thousands of Chinese and Western influencers and intelligence assets, allowing for great insight into the threats we face from China, Iran and the Western inter-connectivity of these countries. Cyrus’s discoveries have led him to coin the new and very complex concepts “The AI Global Bio-Digital Network, The Human Bio-Digital Network, Bio-Digital Social Programming, Bio-Digital Field, Bio-Matter, Rape-Mind, Bio-Digital Hybrid Sexual Assault & Micro-Botic Terrorism.” These terms were needed in order to explain the dangers we face, and how they are rooted in these almost imperceptible elements that are now connecting with Artificial Intelligence, 5-G, Society, Smart Phones, the “Internet of Things,” “Smart Cities,” Cybernetics, Bio-Engineering and Robotics all through one AI platform. Within this platform, Cyrus found extinction codes, in stages in the next 20 years, for humanity.